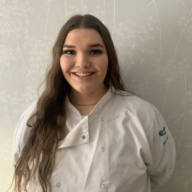 Hollie Martin shows how entrepreneurial spirit and determination can shine despite living through a global pandemic!

The inspirational 19-year-old, who is currently studying a Level 3 Hospitality and Catering Diploma at Guildford College, has recently opened her own bakery business.

Hollie has been an Activate Learning student since she was 16, after realising her passion for cooking while studying catering at GCSE level.

Providing students with relevant courses is essential, now more than ever. Not only does it give them the skills that employers want and need, but it also prepares them for real careers and employability when they eventually leave college.

Hollie said: “I’ve always enjoyed cooking, even as a child. My mum used to be a chef and would always cook, I would often help her in the kitchen and loved getting involved.

“As I got older, I realised I wanted to take catering as a GCSE option. It was then I found my passion for baking, it just came naturally to me.”

Since starting the Level 2 Professional Culinary Arts Certificate at Guildford College, Hollie has been going from strength to strength and has now almost finished her Level 3 catering qualification.

When the first lockdown began in March 2020, Hollie, like many other students, found it very strange not being able to go and see friends at college and really missed the baking element of her course.

It was then that Hollie started trying out different cakes and experimenting with her baking.

Hollie added: “I found baking at home really relaxing and loved being creative and trying new recipes and designs, having a creative outlet was really helpful for me at this time.

“It started off being a bit of fun, baking for friends and family, and then I started to build up my followers on Facebook and Instagram. People I had baked started sharing my designs on social media and through word of mouth and others seeing my creations, I started getting orders through.”

When asked what challenges she initially faced, Hollie said that she was worried about whether other people would like her creations and didn’t feel confident.

However, that has since changed, and you would never guess that she was once nervous! Hollie has a clear and concise plan of what she wants and where she wants to go from here,
a very admirable and entrepreneurial trait!

She said: “If you really want to do something and enjoy doing it, don’t worry about what other people think. You have to start somewhere, I nervous at first but I’ve overcome that, and my business has grown organically.”

It is not just her mum that Hollie recognises in her journey to run her own cake business, she also praises her teacher, Martyn Shanley, catering teacher at Guildford College. She credits
him for setting achievable tasks and pushing her to be the best she can.

“Martyn recognises our weaknesses and strengths; he helps us overcome these by setting realistic challenges which allow us to realise our full potential.”

Martyn fully supports Hollie and the exciting journey she is on. He said: “Hollie has made fantastic progress over the last two years. I do not think she will mind me saying that she did not fully engage with the subject when she started, and I thought that she might change direction and look at other courses.

“The one deciding factor that kept her going was her passion for cooking and that has proven to be a driver that has seen her develop into the great industry prospect she is today!

“I have seen her confidence blossom and Hollie approaches everything she does in a professional manner, resulting in her already achieving full time employment in the industry. This business she has created also shows how determined and enterprising she has become spotting a market need in lockdown, long before it became trendy.

“I think that Hollie is an exemplarily model for the hospitality and catering department at Activate Learning.”

Almost a year on and Hollie is going from strength to strength. Her business, ‘Sweet Sensation’, is growing, and Valentine’s Day saw almost 30 orders. She, along with many
others, are proud of her growth.

Hollie adds: “I feel more confident as a person, but I can see the growth in my work. I have pictures of my cakes from last year and I can see how much better I am now. For anyone out there wanting to take the next step, just do it, don’t let your fear hold you back.”

Relaying her next steps, Hollie says she has big plans and eventually, when she has finished her course at Guildford College, she wants her own commercial kitchen and to grow
her business even more.

Guildford College offers hospitality and catering programmes from Level 1 (entry level to Level 3 (equivalent to three A Levels) in partnership with world-renowned, Michelin-starred chef Heston Blumenthal and his team at the Fat Duck Group.

What sets these unique catering study programmes apart from the rest is the emphasis placed on the fundamentals of understanding ingredients and exploring their tastes, flavours, and fusions. This gives students the best possible start in a demanding, fast-paced, yet hugely rewarding industry.

Learn more about hospitality and catering programmes at Guildford College and to see more of Hollie’s amazing creations, visit @sweet.sensation2 on Instagram.