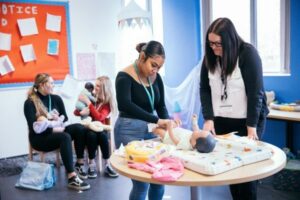 Early years students at Banbury and Bicester College have been researching and formulating ideas to raise awareness about world issues and problems in their project-based learning initiatives.

Project-based learning helps students to gain knowledge, skills and attributes by working for an extended period of time to investigate and respond to a complex question, problem or challenge.

These projects are designed to help students to think critically and develop problem-solving, teamwork and self-management skills.

Two student groups decided to look at racism, while others chose to focus on human trafficking, suicide awareness and mental health or SEN representation during the Covid-19 pandemic. Each of these issues also related to early years education.

Megan May, Early Years Level 3 Extended Diploma student at Banbury and Bicester College, said: “We chose to focus on racism because so many people are affected by racism and we believe that everyone should be treated the same and have access to the same equal opportunities.”

The video features a range of pictures depicting racism alongside with a dance routine performed by three of the students. This is intertwined with statistics outlining the impact of racism in society, to the song Where is the Love? by the Black Eyed Peas.

Tiannon Herring, Early Years Level 3 Extended Diploma student at Banbury and Bicester College, said: “We chose to focus on racism because we wanted to raise more awareness about racism to people who may not know about it.

“We chose a video because some people are more visual learners, and you can really see how racism affects others throughout the video.”

Shannon, Elle and Ashlee decided to focus on suicide awareness and mental health and put together a presentation with fundraising ideas and services to implement at college including mental wellbeing community champions and a drop-in centre.

As one of their next steps, the students presented their ideas to Cheri Ashby, Group Executive Director and Leanne Hicks, Group Head of Student Support at Activate Learning.

In addition, the learners plan to hold a sponsored silence to raise money for suicide and mental health charity SOS Silence of Suicide and may do other fundraising events, if possible.

Shannon Baker, Early Years Level 3 Extended Diploma student at Banbury and Bicester College, said: “We chose to focus on suicide awareness and mental health as my family and I have unfortunately experienced it. I have gone through this in the past and I felt that there was nowhere to go, and I wanted to remedy that.

“We came up with a number of ideas. A fundraiser is a great way to raise awareness. We have decided to do a sponsored silence because people who are suicidal usually suffer in silence.

“One of our ideas was a mental health community where a bunch of people who had suffered from mental health problems or wanted to help, can act as mental health and wellbeing champions who are available for people to talk to. They would wear a badge so that they can be easily identified.

“Another idea that we had was for a drop-in centre that would be open to everyone. We hope to raise awareness about suicide and mental health, whether that be through the wellbeing champions, the drop-in centre or fundraising events and make sure that is such a non-spoken about topic.”

Sheree Wakefield, Faculty Manager at Activate Learning, said: “It has been inspiring to facilitate the project-based learning initiatives of our Level 3 Early Years learners in Banbury.

“It’s been inspiring to see young people who are passionate and interested in important and vital issues which are important to all of us. Their research has resulted in them finding new knowledge but serving to educate and inform us, their teachers.

“It has also provided the opportunity for them to liaise with employers and other outside agencies to examine and evaluate how these real-world issues are being dealt with in the workplace.

“Their passion to see a change in their communities and the wider society gives me hope and faith in the future as these inspiring students, with this type of attitude and desire for change and a fairer society go out and make a lasting impact on the world.”

Find out more about Early Years courses at Banbury and Bicester College or contact via telephone on 0800 612 6008.