The students performed Find a Partner by Miriam Battye at The North Wall Arts Centre in Oxford on Sunday 30 May.

This is the first year that Banbury and Bicester College has taken part in the National Theatre’s annual Connections showcase.

Connections is an annual narrating festival where every year the National Theatre commissions 10 new plays for young people to perform, uniting some of the UK’s best writers with the next generation of performers.

The play they performed is a satirical piece about reality or love shows, reflecting how society views love and what it deems important. It’s similar to Love Island, with its focus on social media with a fly on the wall Big Brother style. 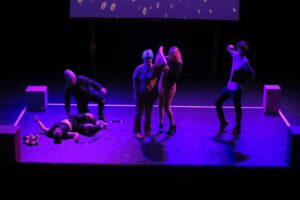 The students took part in three workshops during the day: story telling through movement with Diana Christie, beatbox with Conrad Murray and stage combat with Suzie Buckley, before watching two other shows. Mishmak Youth Theatre presented The Marxist in Heaven, then The REP Theatre Project showed their powerful video of The It.

The young performers then had just 90 minutes to do a full-dress rehearsal and test all the lighting and sound effects. At 8pm it was curtain up, where the students trod the boards in the 200-seat theatre where they executed their best performance Find a Partner, which involved some pre-filmed work and an abundance of bursting blood bags!

Adam Goldstein, Work Experience Coordinator at Activate Learning said: “The cast really enjoyed the whole day, and it was a great experience for them to perform on a professional stage with professional lights and sound, as well as see other shows.

“Like all theatre shows this year, the rehearsal process has been tricky, with many goal posts moving, and rehearsals on Teams. The cast and crew did have some last-minute changes, but everyone stayed positive and motivated throughout; in particular Elly who was assistant director and stage manager.”

Abie Walton, Participation and Projects Officer at The North Wall Arts Centre said: “It was a pleasure to welcome Performing arts students from Banbury and Bicester College to The North Wall for this year’s National Theatre Connections festival.

“The company really stepped it up from the Home Performance, showing loads of energy on stage, and Elly and Charlie (tech and stage management students) were amazing.

“It’s been a tricky year for youth theatre companies, and we were so impressed by Banbury and Bicester College’s students’ perseverance, adaptability and resilience. It is what will set them apart from others in the industry in the future.”

Discover our Performing and Production Arts courses at Banbury and Bicester College or contact us on 0800 612 6008. Find out about The North Wall Arts Centre.